Yeah, it’s literally chillin’.  But let’s go back several minutes before that.  😛

This is the second time I’m going to fly but first for Cebu Pacific and the first trip for 2011.  I’m travelling with Ang Babaeng Lakwatsera with her fiancee, Giane and Blogging Puyat – ayos sa pangalan no?.. hehe.  At one point, I thought that this would be the kickoff of my 2011 bucket travel list. Starting at the northern part of the country until I reached down south (with North America in mid-year.. H-O-P-E-F-U-L-L-Y) I’m gonna worry about that VISA after this post.. 😛

@ 10:30AM we arrived at NAIA 3, an hour and a half ahead of our 12:45PM flight. Thank goodness that we did because the line at the gates were very long.  It already consumed 15 minutes of our time.  We checked in our baggage and looked for something to eat – haven’t eaten breakfast yet! 😛 ako na ang puyat, ako pa ang gutom!.. 😛 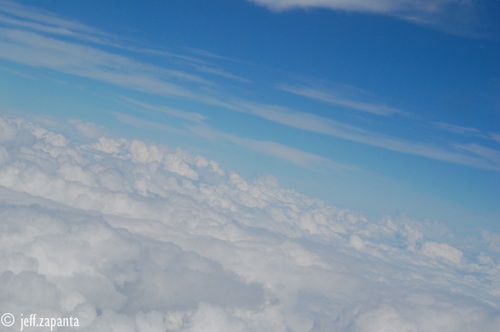 @ around 1:35PM, larga na. The skies are clear and the weather is just awesome – made me think that it’s a perfect timing to tour around Ilocos Norte. Our flight was smooth until the last 5 minutes.  The aircraft encountered its first turbulence and it shook me big time! 😛 yung kaba ko nag-level up!.. 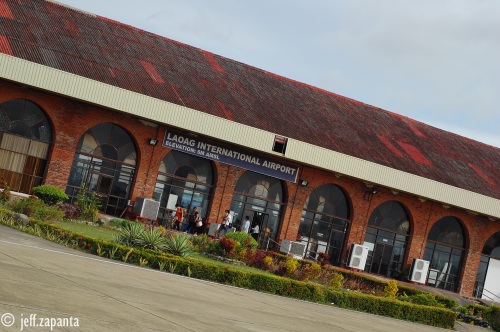 Moments later, raging winds welcomed us as we land at Laoag International Airport.  We arrived at around 2:20PM and you’ll really feel the strong winds blowing into your face..  Instant face massage!.. 😛

I got some info brochures from the DOT help desk and asked a few questions about Laoag.  They cheerfully answered my queries and with no time to spare, we went to the City proper.  Jeepney fare is 40Php/head.  Mahal pag tricycle, aabot ng 100Php plus ang singil tapos dalawa lang ang kakasya.  Maliliit lang ang tricycle sa Laoag though up to 3 persons ang pwede isakay, sa likod yung isa.. In about 10-15 minutes, you’ll reach the city and we started to explore.

Trivia:  One of the biggest cathedrals in the country and seat of the Diocese of Laoag.  The construction of the cathedal began in 1612 and was the site of the Diocesan Congress in 1932 and 1949.  The Augustinians built the church of Italian Renaissance design in 1612.  Its uniqie 2-storey facade is held by 4 pairs of coupled columns.  The deeply recessed niche shows the image of the Patron Saint of Laoag – San Guillermo.

A wedding has just finished..

This is the drop-off point from the airport.  I wanted to see it’s interior but since there was an ongoing wedding and we’re all hungry, we just took pictures.

Trivia:  This 45-meter belltower is one of the tallest built in the country.  A landmark in the city’s skyline, the belltower was constructed by Augustinian Fathers several hundred years ago.

I haven’t seen the front of it or if people are allowed to enter.  And I wonder how the bell looks like.  It’s illuminated with lights which makes it a good sight at night. *rhyming* ^__^

The four of us are all Laoag first timers so we don’t know where to go. Mahirap mag magaling kaya ang dapat gawin ay MAGTANONG. 🙂 It’s also a chance to get in touch with the locals.

We went to Saramsam Resto and Bar to try some Ilocano food.  Saramsam means informal and comfortable way of dining.  I’ve been wanting to taste Bagnet and Poque-Poque pizza.  Thanks to Tony Pet’s Tara Let’s Eat TV show in QTV 11 – I got to know Ilocano delicacies. 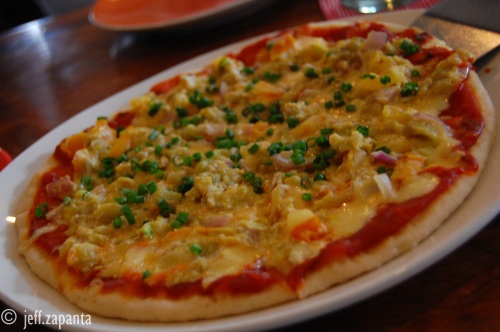 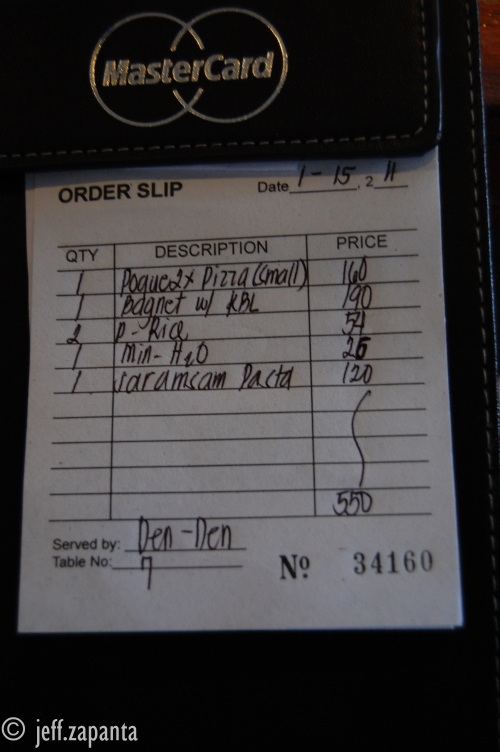 Moving on, we headed to Museo Ilocos Norte which is just a few blocks from Saramsam Bar and Resto. I asked an old lady which way to the museum and she gleefully told me the directions and then asked me back where did we come from.  Sabi ko, “Taga-Maynila po kami” pero gusto ko sabihing taga-Antipolo ako kaso baka hindi sya pamilyar dun.. and then she smiled and said, “Welcome po dito.. “ *aaaaawwwwww* I can’t forget that.. Sweet, simple words.. And I said thank you while smiling back. 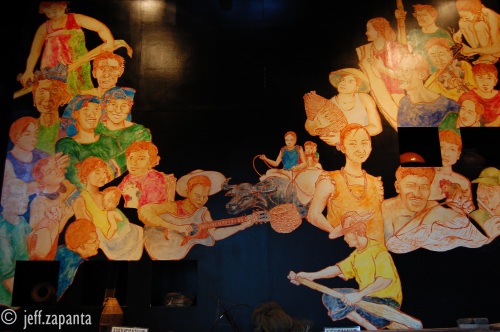 Ilocano's native dresses.. for both men and women..

An old Ilocano house inside the Museum, take a look..

An old kind of sewing for making fabrics.. *forgot what it's called, drop me a comment if you know* 🙂

This old radio is still working, but when you look closely it has a small AM radio at the back which is the one that works.. .. smart huh?.. 😛

There are still a lot of things to see inside.  I’ve always been curious to enter museums since I was in grade school kaya medyo natagalan kami dito. The museum closes at 5PM so we walk our way to the capitol.  It’s just a few steps away. 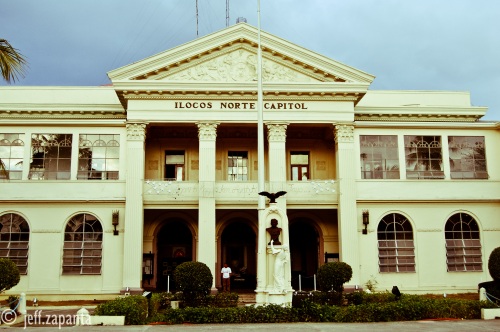 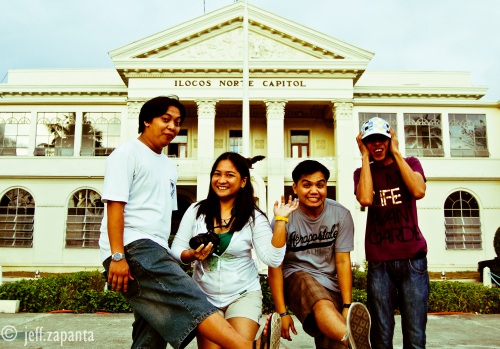 It’s a wrap in Laoag and it’s time to go to Vigan where we will be staying for the night.  There are many bus terminals within the area that offer trips to Vigan, which is heading to Manila (southbound).

@ around 5:30PM, we headed to Partas Bus Terminal which is less than 5 minutes away from the capitol (10Php per head sa tricycle).  Trips bound for Laoag are scheduled every 50 minutes and we’re just in time for the next bus.  Bus fare is 121Php/head, airconditioned with TV.  Sa byahe ko pa napanuod ung Salt kahit may .avi naman ako sa hard drive ko.. 🙂 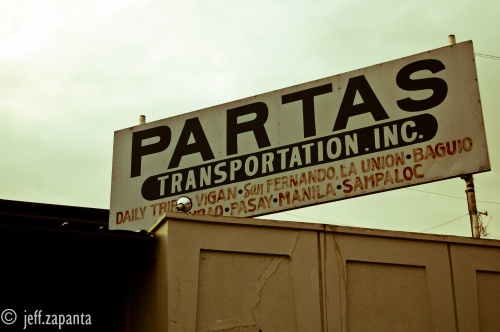 – Getting a map at the airport before heading wherever will save your day.  Especially when you’re not familiar with the place. DOT’s help desk was a lot of HELP.

– There’s still a lot to see in Laoag so if you opt to stay for one more day, try La Paz Sand Dunes & Tobacco Monopoly Monument.

– My special thanks to Marxtermind and Calvin’s Hub where I got the info for this Laoag trip. Salamat mga tsongs!