Ravioli: The Goodness of Fresh Pasta 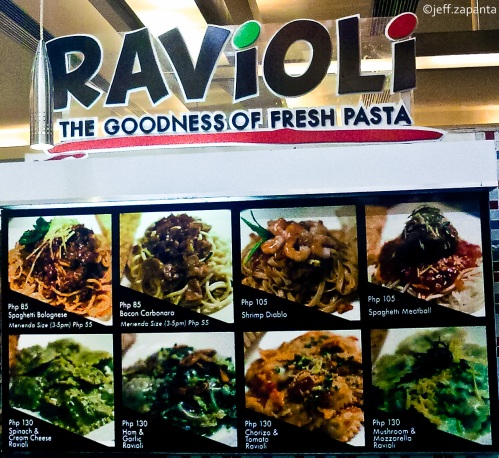 Dinner was supposed to be with rice and ulam but for a change we tried pasta ( I was with Kem BTW).  After walking around Robinson’s Foodcourt, we found Ravioli.  Sounds very new to me and the name has something interesting in it.  I first checked the order of the lady in front of us and I noticed that the serving is reasonable for its price.

My friend WIKIPEDIA told me:

“Ravioli (plural; singular: raviolo) are a type of filled pasta composed of a filling sealed between two layers of thin pasta dough. The word ravioli is reminiscent of the Italian verb riavvolgere (“to wrap”), though the two words are not etymologically connected.”

So much info for that :).  I tried Bacon Carbonara and Kem ordered Spaghetti Bolognese.  How much? Later.. 😛 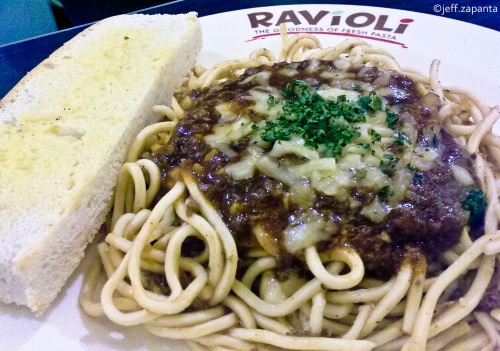 The serving is already good for two except if you really have a big appetite.  I bet the sauce is Italian so its not sweet but the taste is good.  I am a Jolly Spaghetti baby so this is something that I really don’t get to eat often but again, it tastes good.  Usually, spaghetti is made by pouring the sauce on top of the noodle.  This time, the noodle is cooked with the sauce and other ingredients.  Cooking time is less than 5 minutes plus another minute for garnishings.  Plus points to the presentation and the garlic bread – I like et!.. 😛

Just like Spaghetti Bolognese, it took less than 5 minutes to prepare.  This one tastes good as well and has a bigger serving.  They also cooked the pasta along with the bacon bits and other ingredients.  This what sets them apart from others.  Since it’s only like a kiosk (in a foodcourt) it didn’t bother to show their customers how the pastas are made – from the pan to the plate.  I still wonder why chefs need to have the pan fire-filled while cooking (Yung mag-aapoy talaga ung kawali habang andun yung mga niluluto.. :P).  Does it add taste? or just a way of cooking?  Or probably just to impress? 😛  One of the crew (there’s only two of them – the cashier and the chef) is generous enough to add another teaspoon of Parmesan Cheese on my carbonara.

Ravioli can also be found in SM Mall of Asia in Pasay City, Manila and their operations commenced just a year ago.  I’ll better check out the Bistro in MOA and try their baked pizzas.

and yes it is indeed fresh and good..