Barely 3 years ago I was with Anne when I started Visita Iglesia. That was also the time when this blog should’ve been born. 3 years later, I did this again but this time visiting 7 churches only as compared to 14. But to clear it up, how many churches do we really need to visit? 7 or 14? Some visit 15.

According to Visita Iglesia’s website, CBCP cited seven (7) churches to visit during the Holy Thursday of Lent. Nowadays, some Filipinos choose to visit twice that number. Here’s the route we took as we head our way to visiting seven churches this Maundy Thursday.

These three candles represent my prayers for my family, my parents and myself.  May they always be safe and in good health.

When I was a kid, Nanay used to bring me here every first Friday of the month even after school.  Friday is Quiapo day.  I was in grade school then.  I remember she always dresses me up like the Black Nazarene that time – but I don’t know what for.  All I know is she’s a devotee of the Black Nazarene.  Until this time, it gives me a different kind of feeling whenever I go to this church.  It’s serene.  Though it’s a number of miles away from Antipolo, I make sure I get to visit it during my birthday.

From Quiapo we walked our way to Binondo Church and we saw Sta. Cruz Church along the way. We pay a visit and say our prayers.

Aside from visiting 7 churches, other activities during Visita Iglesia include washing of the feet and station of the cross.  We finished at around 7:30 in the evening.

It’s so good to see families praying together and going from one church to another.  This is one thing that we haven’t done though we had other traditions we observe in our neighborhood during the Holy Week – that’s PABASA,  Processions during Holy Wednesday and Good Friday and Salubong during Easter Sunday.

As Catholics we have our respective responsibilities and duties to our religion.  Doing all these things are not merely a requirement – in my opinion.  As long as we keep our faith strong and do what we think is good for ourselves and others, we remain children of God.

As we follow the trail of the Chinese New Year parade that’s set for Quirino Grand Stand, we crossed the streets going to Luneta.  It’s been a loooong while and this  was the first time I saw it at night.  A lot has noticeably changed and the lights added glow to Manila’s finest and most famous park – not to mention being the home of Dr. Jose Rizal’s historical monument.  It’s a family park so I expect to see kids walking and playing with their parents, having a picnic and feeling the cold night.  Students from different nearby colleges/universities were doing their homeworks, dance rehearsals, making group projects, jogging, horse playing, simple chit-chatting and texting.  On the other hand, it’s also a place for lovers who find Luneta a perfect place to hold hands and kiss.  It’s as if they don’t mind children seeing them doing their display of affection.  Never mind them because the night belongs to the newly reopened dancing fountains which is the center of attraction in this spot of Manila. 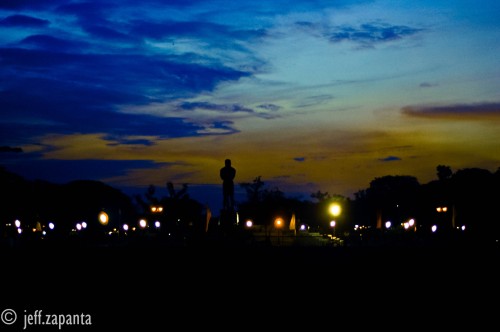 The show starts to the tune of Pyramid 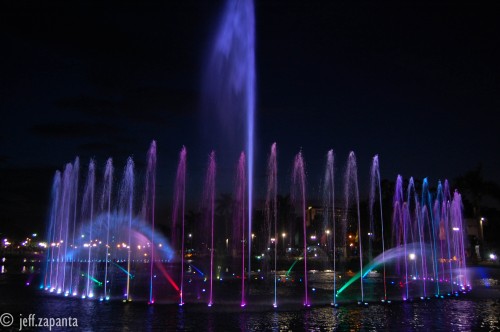 The 88 feet high pulsating fountain with 38 small ones 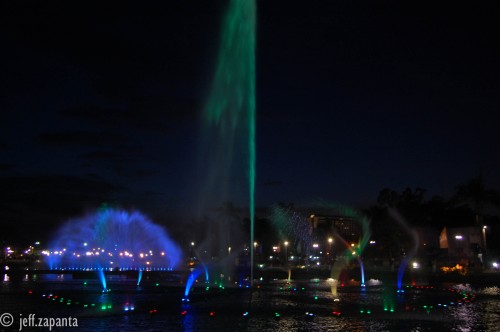 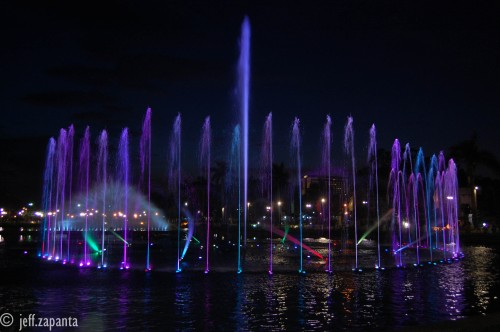 Though I considered this day to be a wrong move for missing the dragon and lion dances on the eve of Chinese New Year, I think it wasn’t that bad at all.  The fountain saved the day!

Posted in Manila, Travel and Trips

Feb. 3, 2011 is Kung Hei Fat Choi.  This is the beginning of the new Lunar Year for our Chinese friends.  I planned to go to Binondo to witness a Chinese New Year celebration and the first plan was on the day itself.  A few days prior, I was informed that ABS-CBN will feature a grand Chinese New Year celebration at the Quirino Grand Stand with a parade that will start in Binondo, Manila on Feb. 2. My plan changed.  Along with my shootbuddy Whattaqueso, we went to Binondo on Feb. 2 to catch the dances before the parade begins.

Lion Dance across the street of Ongpin 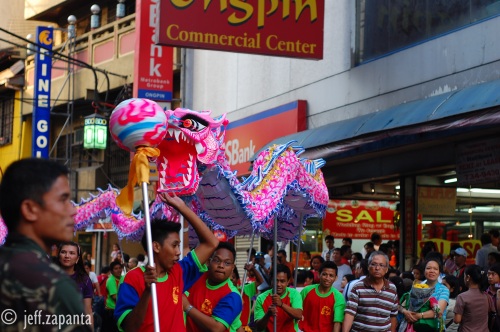 This was not the parade we’re after.  It seemed that we can’t follow its trail anymore but instead headed to the streets of Binondo.  Along the way, we met a group of photographers but they’re clueless as we are to where the parade is heading. 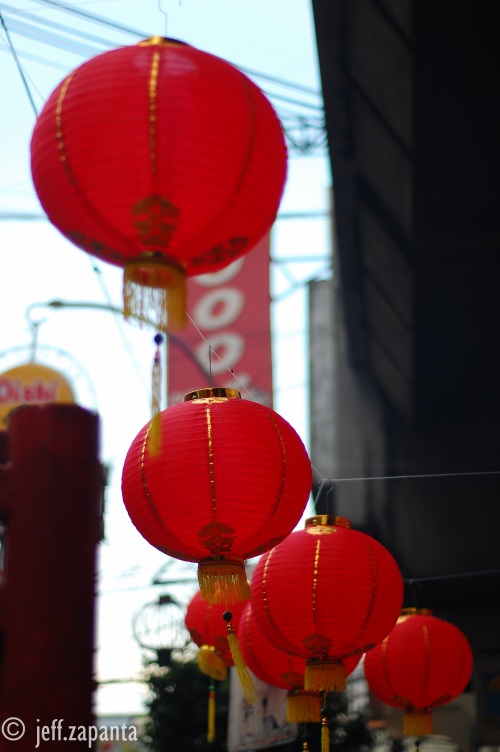 Chinese Red Paper Lanterns to lit up the streets at night

With colorful chicks on the side..

With fruits of different kinds to push more luck 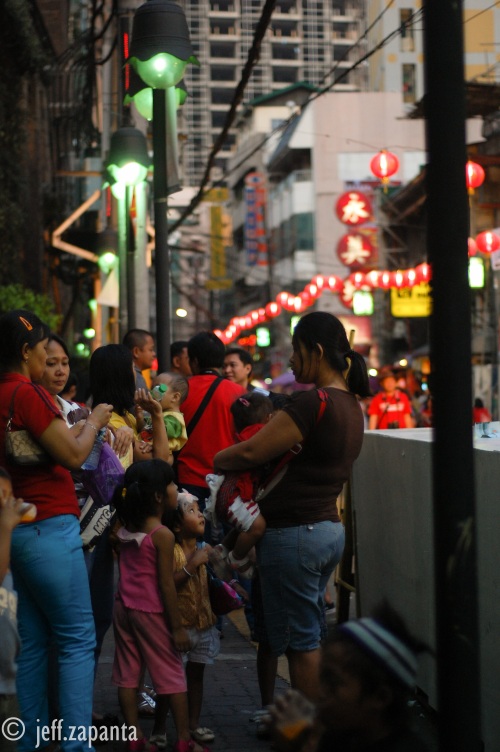 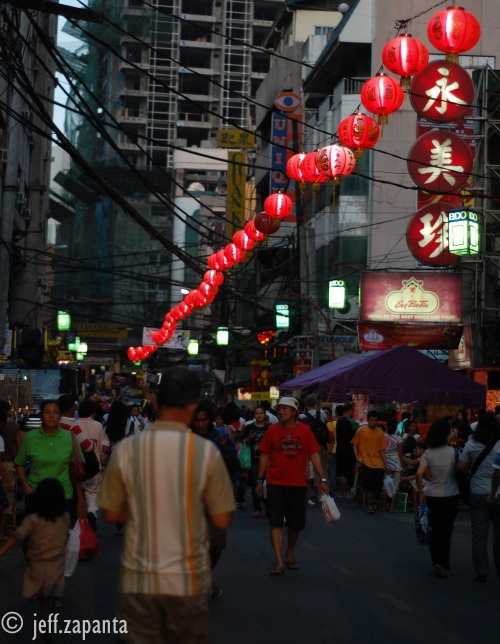 No other lion/dragon dances before the sun sets

All I expected to see today are the traditional lion and dragon dances but I think as the day wraps up, we won’t see any.  In front of Binondo Church is a stage setup for the countdown to the new year.  A lot of people already flocked at the park though the program there starts at 8PM.

Off we went to Quirino Grand Stand for chances of catching the parade before it settles for the grand celebration – but we’re too late.  The program started at 6:30PM and we got good spots inside the venue but it was not the way I anticipated it to be.  As usual, it’s a Chinese New Year the ABS-CBN way with their talents, barricades, bouncers, floor director – in short, it’s a show.  I thought it would be like all dances, performances, and fireworks.  All authentic Chinese.  But it wasn’t.  Though there were some that I saw at the beginning but I opted to call it the day.  I took some shots but I didn’t like it.  I still prefer to take photos of the dances at broad daylight.  I was already tired having only 2 hours of sleep.  Should’ve stuck with the original plan – wrong move today.

I enjoyed the fountain show more in Luneta before we went here and that’s what my next post will be all about. 😀

Posted in Events, Promos and Contests, Manila, Travel and Trips